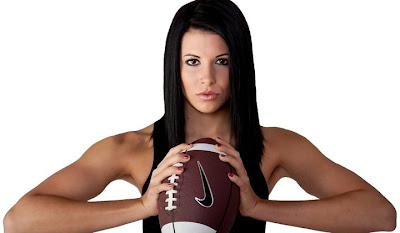 Any pro sport that wants to break through to the mass market has to have stars.
In two seasons, the Lingerie Football League hasn’t developed any name players. To raise its profile, the LFL needs stars that will be the ambassadors of the sport. Stars get butts in the seats and give fans someone to cheer for.
For season three, the LFL has two stars in the making: Seattle Mist quarterback Angela Rypien, the daughter of Super Bowl MVP quarterback Mark Rypien, and Toronto Triumph linebacker Krista Ford, niece of Toronto Mayor Rob Ford and daughter of City Councillor Doug Ford.
They’re relatives of sports and political figures, so that gives news writers a hook to cover the games. So far, the LFL has gotten scant coverage from the mainstream media, which treats it like a peep show. Adding stars can only help the fledgling league.
The first exhibition games for the Lingerie Basketball League last weekend got some press coverage thanks to an appearance by actress Jenny McCarthy, who came to cheer on her sister, Jo Jo McCarthy, who plays for L.A. Beauties.
The LFL should find more celebrities by association and even borderline celebrities (C-list actresses, reality TV stars, etc.) to fill out their rosters.
Before she made it big on MTV’s “Jersey Shore,” Jenni “JWoww” Farley tried out for the Lingerie Football League, according to Media Daily LA.
The WNBA got some badly needed press when it picked up disgraced Olympic sprinter Marion Jones to play for the Tulsa Shock. She was cut from the struggling team mid-season this month. Maybe the LFL should find a role for her. We know she’s fast.
Something to think about as the LFL plays its annual All Fantasy Game tonight in Hamilton, Ontario.
The LFL's third season kicks off on Aug. 26. 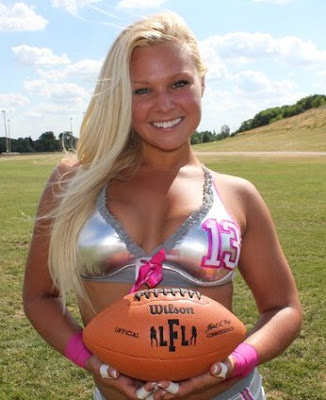 "Angela Rypien Discusses Her Dad And Getting Ready For The LFL Season" (The Redskins Blog; May 16, 2011)