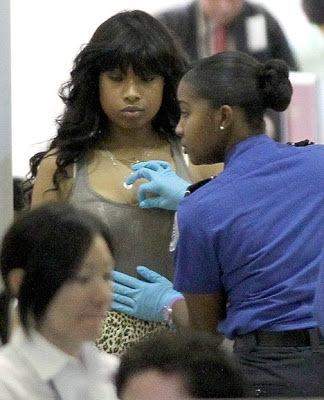 The TSA pats down a lot of attractive women, as I’ve previously written. These women don’t fit anybody’s profile of a potential terrorist. But TSA agents continue to feel up young ladies either because they like pointless “random” pat downs or they’re perverts.

The TSA says it doesn’t do racial profiling, but that’s not the case, based on numerous complaints by passengers of color. Many note how they are “randomly selected” for additional screening every time they go to the airport to catch a flight.

3. Mistreating the elderly and the infirm

People often tweet their observations of TSA agents making senior citizens and disabled and sickly adults and children get out of their wheelchairs to go through the stand-up body scanners. If they can’t, they’re subjected to humiliating pat downs.

4. TSA has a hair fetish

If your hair is in a ponytail, a bun or just poofy, TSA agents are going to want to put their fingers in it and dig around for contraband. Twitter responses range from “WTF?” to complaints about TSA screeners messing up their perfect hairdo.

The TSA has fired hundreds of screeners for theft from passenger luggage. But judging from the complaints on Twitter, they’ve got a lot more bad apples to sort out. Valuables go missing all the time from carry-on bags in the screening area as well as checked luggage.

6. Vandalism and careless damage to property

The TSA carelessly or maliciously damages passenger property. Travelers take to Twitter to complain about agents dropping their laptops and tablets, cutting off their TSA-approved locks and failing to zip up their bags after inspecting them. I’ve also seen quite a few cases of screeners opening shampoo, perfume and other liquids and dumping them on travelers’ belongings.

7. Confiscating toothpaste and other innocuous liquids and gels

The TSA continues to piss off travelers by confiscating their water, sodas, toothpaste and other liquids and gels on the astronomically remote chance that it could be explosive material. Do they treat it like a bomb after confiscating it? No, they just toss it into the nearest trash bin.

Horn-dog TSA men are always hitting on female travelers. This is especially infuriating when they’ve just forced them to go through the nudie scanner or get a pat down. Lots of women report unwanted flirtatious behavior by TSA agents on Twitter.

9. Making fliers who opt out of the scanners wait

Passengers have the right to opt out of the radiation-emitting scanners at the airport. But they often have to wait seemingly forever for someone to conduct a pat down. This passive aggressive behavior has been documented time and again.

Men and women alike have taken to Twitter to complain about aggressive full-body pat downs by the TSA. Many have described sexually invasive fondling of their privates. Some men say their testicles have been rammed by TSA agents during frisking.

The TSA is often referred to as “Thousands Standing Around,” because screeners are seen standing around doing nothing. When they are doing their jobs, they frequently are angry and combative. Many times they don’t understand their own rules about what is permitted in the screening area.

I think I’ve made my point with TSA Rants and likely will wind down my activity on it. It’s time to move on to other pursuits.
I’d probably stick with it if Twitter had a better way to search tweets. More on that later. 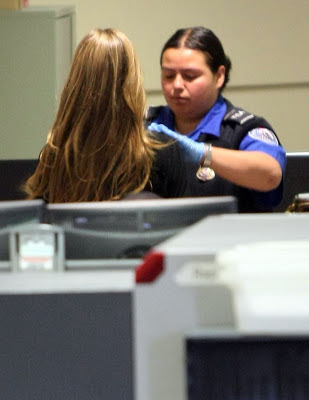